Julia, Julio, And a Few Lessons on How to Pursue the Finer Things 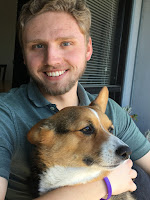 This is Marc, aka ‘Julio.’.  He is our second child, six foot four second son, soon to be headed to Canada to begin studying and flying at Prairie College.  We're very proud of him, as most parents are (or should be) of their kids.  Most of the things about him are fun, and of course, those qualities are what we brag about.  He's a great writer, he plays a mean violin, and he is frequently complimented for being very caring and compassionate.

But, he is also extremely impulsive, and the word 'no' means very little to him if and when he really wants something.  Everything is 'wide open fun and games run like a mad man at it' until he gets hurt.  Then, after his owie goes away, whatever that might be, off he goes again, one more time.  From a mother’s point of view, this had been scary at times.

He also has a taste for the finer things in life.  And boy can he tell the difference between a knockoff and the real deal!  Clothing, food, music, cars, you name it, he has a good idea of what 'best' should look like.

So when he asked for a Julia Childs cookbook one Christmas, I knew better than to give it to him.

"French cooking and cuisine just have a 'feel' to it Mom, ya know what I mean?"

I did have a 'feeling,' and it was worse than the feeling I usually have after I eat rich French food.  Somewhere in Marc's past, between the good old green beans and bacon and an occasional butter garlic laden filet mignon with a side of sautéed mushrooms, Marc had had a taste of upscale culinary delights that he wanted to make at home.

After several serious attempts at trying to get him to scratch this off his Christmas list, I realized my efforts were futile, and I ordered the book.  As they say, 'The rest is history.' 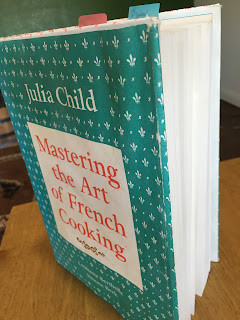 Marc chose two recipes, Beef Bourguignon, and French Onion Soup.  My husband was annoyed because Julia insists that to achieve the highest level of flavor, only the best ingredients should be used.  No chuck roast for this effort.  And the Chianti?  You don't even want to know how that part of the discussion went.  All I will say is that I must have received ten texts while my husband shopped at the store, and the content was not questions.  Nope. All complaints about Julia, her attitude about $3 red wine and Marc's refusal to settle for ingredients that we could buy without selling one of our cars.

The recipe for the Beef is four pages long.  I had read through it before he started because I knew he would be asking questions by the first paragraph.  I was gardening that day.  Yes, it's all coming back to me now.  I heard the back door open and shut, for what would turn out to be the first of about twenty times, and here Marc came, nose in the book, confused look on his face and honestly I don't remember the question.  But whatever he asked, I knew that he was somewhere between peeling and caramelizing the 500 pearl onions.

"You're still on the first page aren't you?"  He didn't answer, but undaunted asked his first question.

And the next day, the completed dish was as beyond exquisite.  Yes, a day later, we ate it.  Here's the funny thing, well, at least now it is.  Julia wrote a simple little sentence at the end or the recipe that went something like "This dish is very good the next day."  Of course, because it takes a day to make!

My poor gracious mom endured much of my complaining during this ordeal. Typical Mom, always encouraging and looking at the bright side, would comment that this was like many recipes, as well as most good, 'worth doing' things in life.

“It's not hard, or complicated, but it takes time.”

Time.  More expensive than a good cut of beef and really expensive Chianti.

But as Dad says, "The juice is worth the squeeze."

Back to the Sanitary Transportation Rule

Some of you this past week were a little incredulous about my email newsletter last week.  After all, you have been either handling or managing some part of transportation for a long time, and 'this food safety thing' can't be as bad as it sounds.  Right?

Yes, compliance for carriers, shippers and receivers is non-negotiable and may take some time to develop and implement a quality program.  Look at it from the end consumer's point of view.  They have a right to expect their food, and the supply chain that brings it to them will be safe and secure. Also, the FDA has decided what 'preventative' actions, behaviors and/or practices should be, and will enforce them. Yes, compliance will be a part of our life.

There is a flip side to this, however.  Think about it as another great opportunity to gain respect and trust in your company.  It’s Brand Building time folks! 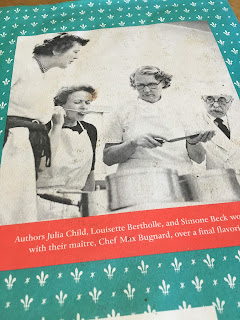 Take it from Julia, and Julio.  There are some good things to remember when it comes to pursuing the finer things in life.

First, time and money will be well spent.

Use Julia’s take on making fine food.  Instead of thinking about the four pages of detailed instructions, focus on the end result.  We all want customers to think words like quality, excellence, and best when they hear our names.  These company characteristics are like money.  They do not grow on trees, and they will take large amounts effort.

And speaking of money, I would just encourage you also to consider costs in a variety of ways.  Concentrate on the long term reputation building/strengthening opportunities that customers and consumers will notice and for sure use to decide whether to buy your product or service instead of your what your competitor is offering.

Hmmm...What is the cost of not putting your best foot forward in your compliance efforts?

Second, learn to look ahead and reap the benefits of good planning and preparing.

If Marc had at least read through the recipe, he could have had a better idea of how the parts became the whole.  The progression of steps, and the places he could have either taken a shortcut or made the process simpler would have really made a difference in time and effort.

I have posted 10 things to think about now before the final Sanitary Transportation Rule is published.

But why should you listen to me?

I am working through my 18th year of owning a produce transportation company.  My family and friends work in multiple areas of agriculture and/or end consumer businesses.  When I wrote those ''threshold' questions, I relied on my expertise, my experience, and my education, which by the way, never stops happening.

My point is, use me.  Work through these questions to look ahead and begin planning.  This alone will simplify the process.

Some parts of compliance will get easier because the steps will become more familiar and methods of doing certain things will become streamlined and definitely improved.

Some parts will always take time and effort.  It is what it is.  Like I tell my kids, if it's something you can't change, change your attitude.  How simple is that?

Third, try not to do it alone.

Julia had a few cohorts in her recipe making/testing process, and definitely had help writing her book.  Marc had me to encourage and prod him (ok, a small bit of nagging) through his cooking experience.

Gather your team around you, define your goals and expectation, and then support each other through the process.

Now, get ‘cooking!’ Call your transportation partner today and start working on your program.  If they can’t or won’t help you, call Aly or I and we’ll get you rolling.
Posted by Pam Young at 2:29 PM